Ready or Not — #AI Will Change Your Marketing & Sales

I distinctly remember reading "War of the Worlds" in school.

I loved reading about how Martians invaded Earth and how people reacted to machines taking over the world.

However, I was even more fascinated to hear about the real mass panic that was caused on October 30th of 1938 after the radio play was performed by a theater group in the form of a news broadcast. Thousands fled their homes because they thought the world was coming to an end.

Now, there is a similar angst going around.

No, people are not actually fleeing their homes this time because, unlike in H.G. Wells' book, these machines came quietly into our homes. We've welcomed them as friendly helpers — washing machines, computers, and even self-driving cars. But it has gone far beyond that already.

What Is Artificial Intelligence?

While there are many emerging technologies that will shape and influence our future job security and roles, I want to focus primarily on Artificial Intelligence since I believe it has the most immediate impact.

So, what exactly do we understand about Artificial Intelligence (AI)? Well, let's start by saying that it isn't anything new. The term was coined in 1956 by computer scientist and the Father of AI, John McCarthy. In 1971, Nils Nilsson said in Problem-Solving Methods in Artificial Intelligence, "The goal of work in artificial intelligence is to build machines that perform tasks normally requiring human intelligence."

However, this definition makes me uneasy. In my opinion, Artificial Intelligence does not intend to mimic human behavior — it intends to do it better than humans could ever do it. Combine that with the power of technologies engaging with humans and Big Data alike, while at the same time collecting data points and insights everywhere around us at all times, and you get a glimpse of what the future of marketing could look like. ChatBots, Artificial Intelligence, and customer journey analytics are just the beginning.

Cognitive Technologies Will Not Only Replace Blue-Collar Jobs But Also Lawyers, Doctors, and Marketers

As Artificial Intelligence, Big Data, and the Internet of Things get more deeply engrained into our daily lives, people are starting to panic again. How will this affect my workplace? Could I lose my job? The answer is simple: Absolutely.

Many people think that only jobs that require simplistic, repetitive tasks will be replaced by bots because machines lack the ability to think like a human. But this kind of thinking is more based on Hollywood movies than reality.  According to research by the Harvard Business Review, this erroneous way of thinking is based on two misleading assumptions:

Firstly, because technology is incapable of being creative, showing empathy, expressing humor or exercising judgment, which are qualities needed to be successful in these professional service capacities, there is no need for concern. However, professional work becomes routine and process-based when broken down into component parts.

Secondly, because machines will do so by copying human behavior, this cannot possibly make them better than us. But we are forgetting that they are already better than us. They have access to and can compute a much larger set of data. They are not clouded in their judgment or limited in their creativity by personal emotions, and they're more precise than humans could ever be. They can more accurately predict a court's decision than a human lawyer due to the outcomes of countless previous cases, or forecast more precisely an outbreak of an epidemic based on the vast amount of historical medical data.

To understand how AI will impact our job situation, as well as the future of marketing in general, we have to take a minute and look at what is already available.

Different AI solutions/approaches can be mapped according to their technical sophistication and their mass adoption or application, as you can see from the Simplified AI Landscape by HubSpot Research.

As you can see, most of the applications of AI are centered around language processing and machine learning.

In terms of marketing and sales, this means we will need to take a long hard look at the areas where we can become more efficient, where we struggle with information overload, and which are repetitive. For example: 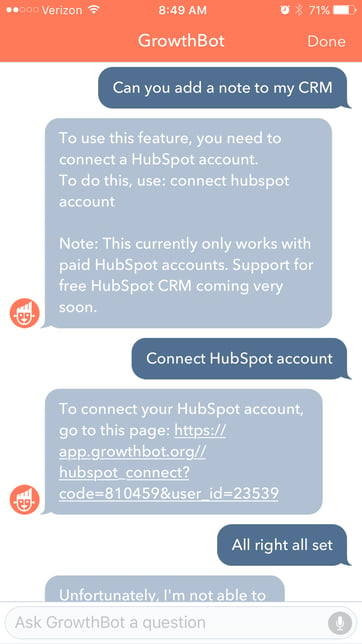 ChatBots will manage a lot of the initial contact with prospects, customer service, and information discovery. While they don't actually "think" for themselves (and some people would, therefore, argue that they are actually not really AI), they can understand the way humans speak and write.

Once a question is asked, ChatBots will compute the question and answer the inquiry with a pre-loaded response or action.

On the right, you can see a sample conversation I had with GrowthBot by HubSpot in my iPhone app. While GrowthBot is still in its infancy, the fact that it is there is letting us know there is more to come.

Since they compute each question, the response and the reaction (or action was taken) based on the reply given, they can optimize their responses and improve overtime.

It makes sense that the mass adoption of artificial intelligence in business would start in sales since it most directly impacts revenue.

This year, several CRM vendors added AI to boost sales productivity. According to TechCrunch, some customer relationship management tools can now not only record sales interactions, but can drive more sales with built-in intelligence.

AI will allow a sales person to prioritize better tasks that have a higher probability of resulting in increased revenue. It will also start taking over the initial sales follow-up with workflows and initial email outreach.

But it does not stop there: Initial customer interaction will also be taken over by AI — bots will handle the simpler tasks and hand off more complex cases to their human counterparts. Other than human customer service representatives, AI is able to learn from every single interaction and become smarter and more efficient along the way!

I think we can all agree that basic and easily created content will, at some point soon, be replaced by bots "writing" it. But what about carefully crafted pieces of content that add value? While this will take longer, make no mistake — one day, these also will be replaced by cheaper AI-generated content. Well, considering that two of the top blog posts examined by Mark Schaefer were written by machines, not humans, that gives us an indication of what is ahead.

But there is no need to panic just yet. As Jayson DeMers from The Huffington Post says:

“Content marketing is probably going to die at the hands of robots, but it’s still got a long life ahead of it.”

Just as sales people will need to adjust, marketers also will need to face the truth: AI is not going away. It is only a matter of time before it comes to replace some part of your job. Be ready! 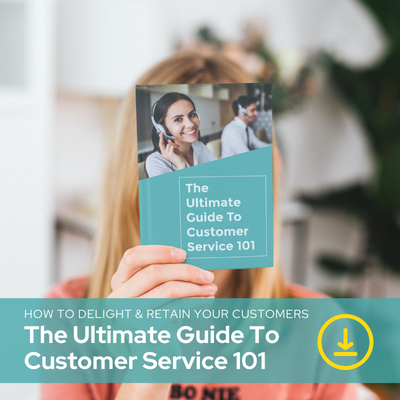 58 Inbound Marketing Ideas That You Should Be Doing, But Aren't (Yet)

Let us know what you think